Q: I'm an artist. How do I get my work in Spacewarp?

A: All the stories have their artists and they are the founders of the comic. Namely Bruno, Gareth, Charlie, Ian, Mike, James and Ade. As it’s creator owned, the comic is as much theirs as it is the writer’s.

It’s a fantastic achievement by all these guys and they deserve to control the destiny of their creations.

It’s not like Judge Dredd or Spiderman where new artists can come on board and build on what’s already there. Dredd and Spiderman are both house characters because the original artists have sold all their rights to the ownership of these characters.

There are no house characters in Spacewarp, with one exception. See below.

Future Schlock is the best opportunity at this stage. But Pat’s not in a position time-wise to evaluate new art just yet.

If the founders were okay about it, and someone did a professional standard pin-up of their character/s, we might run it on the website but there’s no money involved. And only with their express permission. Some artists like other artists paying homage to their characters. Others definitely do not! And that’s entirely their right.

Because Spacewarp is about empowering creators, rather having their power taken away from them, which is the traditional British way – an old-fashioned system which nearly destroyed Brit comics.

That’s why we think differently on Spacewarp and you may need to get used to ‘unthinking’ the old system and old ways of doing things.

Maybe the safest bet is drawing Slayer alone who is – uniquely – a SW house character. But definitely NOT the worlds or other characters you see him with, because they are another artist’s copyright and it would need their specific permission.

Or visualising some aspect of the Warp that does NOT involve the existing stories.

Or just some science fiction art that you wanted to reach a wider audience.

Or you had some cool idea for a relevant feature – like Hide and Survive in Jurassic Punx, which does NOT feature characters that belong to the founders.

But be warned – cool features take DAYS of work to get right. They are great fun, but they’re TOUGH to produce!

Also… as long as it’s clear your work would probably only appear on the web and we cannot pay you for it.

And it could be a while before we look at it.

Reader fan-art is a completely different thing – where readers just want to have fun drawing. We love that and really want to encourage it and we should probably talk about that in detail next time.

Q: I'm a writer. How do I get my work in Spacewarp

Q: Pat’s using TV series as his role model. Usually on TV productions, the writer-creator scripts episode one, episode two and then plans out the rest of the series – maybe a page or two on each story, and commissions one or more writers to script those further episodes. It needs new writers who can work within those ‘tramlines’. It’s not a ‘freestyle’ operation. You can’t do your own thing. So we’re just at the very beginning of that process. For now, we want to stay with our existing stories rather than create new stories in the Spacewarp universe.

Pat’s already got more Future Schlocks in the pipeline so doesn’t want to open that up at this point.

Pat’s not in a position to read stories at this early stage either. He thinks it likely that he would look at material AFTER he’s done Phase Two.

Also, bear in mind that Spacewarp stories are creator-owned, so it would need the artist’s approval to illustrate the work of a new writer. Such a writer would need to show the artist as well as Pat that he had the skills to produce work to a high standard and be prepared to go through several drafts, just as Pat normally does. And also that he can write for an all-ages, popular culture market, the market on which comics were founded, rather than for an elite or aficionado market. There’s a very specific style to Spacewarp, it’s more accessible than stories aimed at an older audience. And the stories are also more compressed, requiring more work but offering the reader more value for money.

In Pat’s view, that may take some ‘unlearning’ if you have a background of writing for superhero comics, for instance. Because the Spacewarp way is the way comics used to be produced and it’s why they used to attract huge audiences.

And there’s also the question of how to make it economically viable both for Pat to spend time with a new writer and for it to be worthwhile for the writer himself, so he’s happy writing several drafts.

It’s going to take some thinking to get it right. Thus we are some time away from opening this up to new writers, much as we would dearly love to share with them. Because we really do want to encourage new talent.

It might be possible to run an auxiliary text story or feature (like the features in the comic) that expands a particular story. For example one of Dada’s adventures in another time or space that was relevant.

Thus we expanded Hellbreaker in the comic with a prologue by another writer, which required no work whatsoever. What he came up with was perfect. In fact it was fantastic.

That’s worth a study.

If it was ‘oven ready’ and required NO work by Pat, and we thought readers would enjoy it, it could go up on this site as a demo piece/fan fiction as long as it’s clear we can’t pay for any material on the web. It could show what a new writer is capable of and help us plan for a future in which he could be included.

But be prepared for long delays because Phase 2 has to be our priority.

Q: I'm a journalist and would like to feature SpaceWarp. What can I use?

A: You can use a sample image or two from a story. Or show the cover: 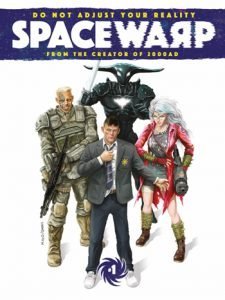 Do please credit and note copyright on those involved:

Or write to pat@spacewarpcomic.com for more info.

Q: When is Spacewarp Phase 2 coming out?

A: According to Doc Zot, he says it will be at least six months – and he’s never wrong. Think of Spacewarp Phase 1 as a first ‘Season’ of stories. With a TV debut Season, a second Season follows usually a year later. We’ll try to improve on that. Meantime, we have Bonus Material on our website to keep you going. Like the examples mentioned elsewhere in FAQ.

Q: When is the paper edition of Spacewarp Phase 1 coming out?

A: We think in the autumn.

A: Definitely. Do get in touch with them on their website or social media account, or via our contact page, and we’ll pass your request along. We’re sure they’d love to hear from you.