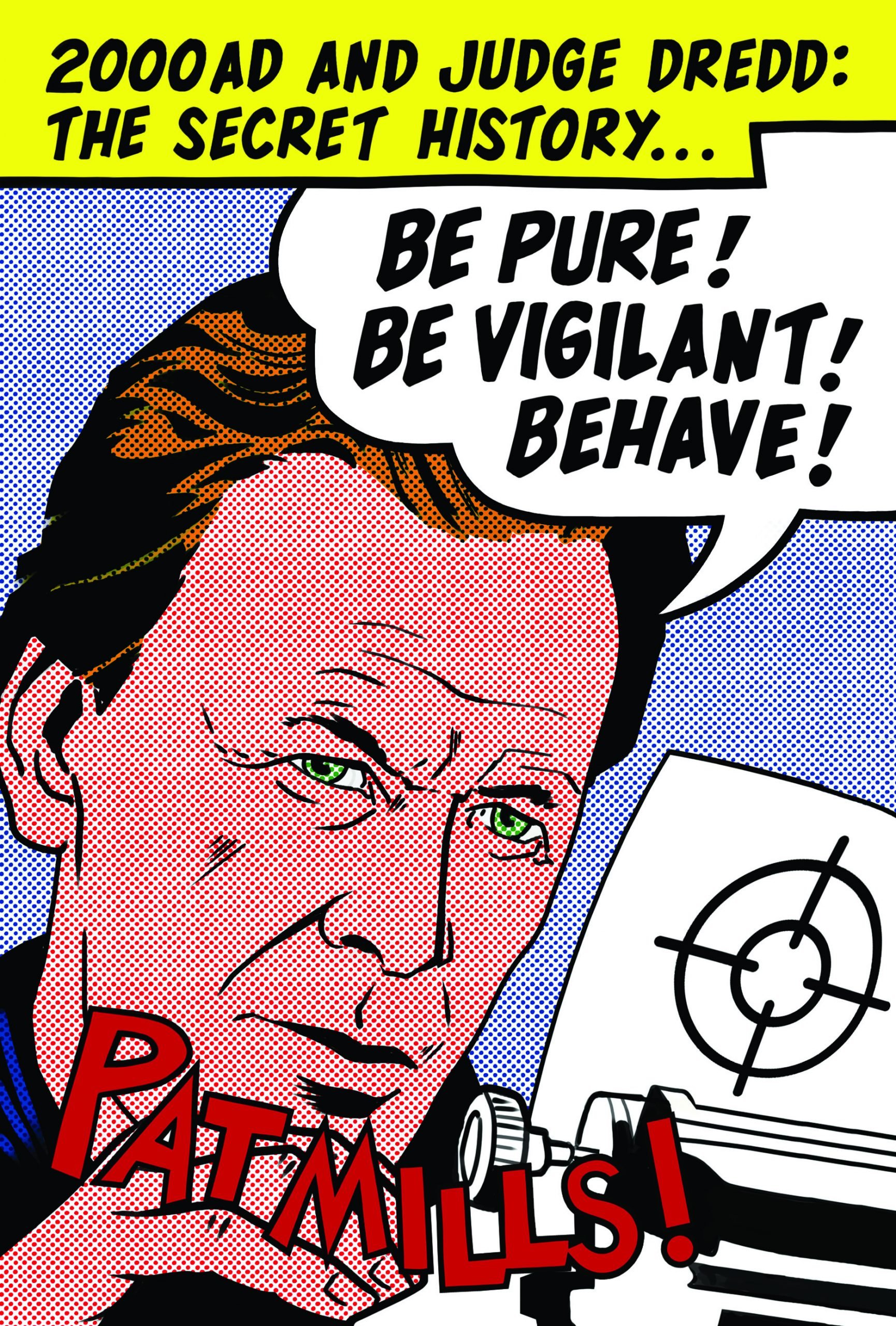 Be Pure! Be Vigilant! Behave!

Pat Mills is the creator of 2000AD and one of the comic’s top writers. He is also the creator of Action, co-creator of Battle, Misty, Marshal Law, Requiem Vampire Knight, Charley’s War (described as “the greatest British comic strip ever created”) and the black comedy text novel Serial Killer.

As 2000AD and Judge Dredd celebrates its 40th birthday, Pat at last writes the definitive history of the Galaxy’s Greatest Comic, and the turbulent, extraordinary and exciting events that shaped it. Be Pure! Be Vigilant! Behave! is the infamous slogan of Torquemada, the comic’s favourite villain. It once appeared on the Berlin Wall, and symbolizes the subversive nature of 2000AD that changed so many readers’ lives and influenced generations of film directors, actors, rock bands, novelists and even school headmasters.

Everything you’ve always wanted to know about Judge Dredd, Slaine, Nemesis, ABC Warriors, Flesh, Bill Savage and more, is in this book. Plus the writers and artists who created them and the real-life people and events they drew on for inspiration.

The scandals, the back-stabbing and the shocking story that was regarded as “too sensitive” to ever see the light of day is finally told.

Pat relates the dark story of the maths teacher who inspired his version of Judge Dredd, the creators’ angry battles with the censors and each other, why certain writers, stories and even readers have been banished from the comic, a step-by-step account of how Judge Dredd was created, and how to write or draw for 2000AD today.

There are new insights on the 2000AD creators’ invasion of American comics, their failed French invasion, the Judge Dredd films, the forthcoming Judge Dredd TV series, other possible films featuring 2000AD heroes, the unusual secret of the comic’s current success, the tough challenges it faces today, and its exciting future.

From the hilarious origins when Judge Dredd writer-creator John Wagner and Pat began their careers writing together in a garden shed by paraffin lamp, to the tragic stories of legendary comic artists who have passed, and the challenges as 2000AD fought for survival against The Suits determined to destroy it, this is a unique, personal, and passionate account by the man who made 2000AD happen. Funny, sad, angry, defiant, and outrageous: it’s the Comic Book memoir of the year

> Get the audiobook, narrated by Pat!

I had moved across the water from Dundee, to Wormit in Fife, and there John and I made our plans to make a living as comic book writers. We had a great time working at DC Thomson’s. I have fond memories of the two of us walking the corridors of the DC Thomson building, known as the Red Lubyanka, wearing dark green visors with ‘HACK’ written on them in white letraset. But we both wanted more from life. The garden shed was to be our office. Almost everything we wrote together clicked with the editors we submitted scripts to, ranging from War Picture Library to Cor!!. I left DC Thomson’s and John followed shortly thereafter.

It’s hard to imagine how we never killed each other back then. Two strong personalities sitting in a shed, writing and arguing about comic stories through all-night scripting sessions, because John was an insomniac. Relieving the tension with intermissions where we played football (in the shed) at three o’clock in the morning. Breathing in the evil green fumes from a solitary oil lamp, so we would regularly have to take fresh air breaks outside in all weathers. Keeping our pet spider suitably fed with dead wasps until the spider finally gorged itself to death. Playing volleyball over the washing line until John broke his ankle during the game. I’ve always felt guilty 7 about that, because my garden was on a steep slope and John jumped back to hit the ball and … Krak!

We would do anything to relieve the moronic tedium of writing for Whizzer and Chips, Whoopee, Shiver and Shake, Cor!!, Lion, and Valiant.

If you’d like to know more about that truly awful, but also rather funny era, check out Serial Killer, the first book in the Read Em and Weep black comedy thriller series I co-wrote with Kevin O’Neill. Read Em is also a fictional version of the story of British comics in the 1970s, where life in the shed is described in chilling detail!

But our frustrations showed us that if we didn’t like the comics or stories we were working on, we would ultimately have to create our own, which would culminate in 2000AD and Judge Dredd. One example of the stories we wrote together illustrates what the comic world was like back in the early ’70s.

With our love of satire, we had created Yellowknife of the Yard, the story of a Red Indian detective who is sent to Scotland Yard on an exchange scheme. We submitted it to the Hotspur editor, who wrote us a furious rejection letter, claiming we were insulting Scotland Yard by having an American Indian as a police inspector. Seething with rage, he said our story was potentially libellous by giving Yellowknife an incompetent British police sergeant as his dumb sidekick.

So we then submitted it to Valiant, who accepted it straight away. The story wasn’t great, but there was one excellent scene John had come up with which we both loved. It showed Yellowknife approaching his wigwam in the American desert and the text waxed lyrical about the romantic life of an Indian living a timeless life in harmony with the earth and nature. Yellowknife steps inside his wigwam and there are steps leading down which lead to … an underground disco. It was Saturday Night Fever down there.

That was the one change they wanted. Satire not required. But we had some fun on a later story where we featured Yellowknife up against the Fat Gang. And should you have any old copies of Valiant from that era, you’ll see the obese villain has a belly wheel to support 8 his massive gut, something I think I dreamed up, and Dredd fans will know all about. Great fun!

But we weren’t happy writing conventionally humorous comic strips. We did get one break, when we wrote Boo! Peter—a Mad Magazine-style piss take of Blue Peter, which, it will come as no surprise to you, both John and I loathed but were forced to watch for our research, noting how Noakes, Singleton and Purves spoke in linked trio dialogue, invariably ending with “Super!” Our piss-take was hugely popular with test-audiences. In fact the kids liked it so much, they wanted Boo! Peter to appear every week. They couldn’t get enough of it and, well, I think we had enough bile about Blue Peter to oblige them. But IPC didn’t have the bottle to go ahead and do a British Mad Magazine, just as later they would turn down Viz. I imagine our story’s probably been published in an annual or something and I like to think it holds up well to this day. Super!

But we weren’t happy bunnies and things just got worse and worse. We were commissioned to write a text Yellowknife story for the Valiant annual, but we were so skint, we couldn’t afford a ream of typing paper. So I hit on the brilliant idea of typing it on tracing paper, of which I had a plentiful supply. Shortly afterwards, my Trimphone trilled and the assistant editor of Valiant, Steve Barker, was on the other end. He was furious—no, he was demented … he was deranged. He proceeded to tongue-lash me for half an hour for submitting an unreadable story. My lame suggestion that if he put it on white backing paper it would be okay, only worked him up into a greater, foul-mouthed froth that left me trembling on the end of my Trimphone.

Eventually John left to work for IPC in London and I continued writing Yellowknife and various other stories and cartoon strips. I needed the money, but ultimately I had to admit to myself, “I am writing absolute crap here. This is awful. The readers must feel the same way. I’ve really got to bring this to an end for my sanity’s sake.” So I rang Valiant up, fully prepared to sack myself.

Thankfully, it wasn’t Steve Barker who answered the phone. In fact, I believe he had died around this time. (I’m told he was found drowned in a swimming pool.) Instead, a new, chirpy young chap answered and I explained my serious misgivings about Yellowknife. “Oh, no,” the friendly lad reassured me. “It’s great stuff. Keep up the good work.”

So, somewhat reassured—but not entirely convinced—I carried on with Yellowknife for a miserable while longer before finally kicking it into touch. That chirpy young chap was Steve MacManus, later to be the editor of 2000AD.

At this point, it’s necessary to explain the factory system through which Britain’s comics were produced, often resulting in flat, ephemeral, disposable stories and art, because nobody cared, and then to jump forward in time to show how creators, including myself, fought our way through to find Jerusalem and produce work of lasting value on 2000AD. Because that problem and its solution is at the heart of its success, and it explains many of the tensions between editorial and writers and artists and why some of the Galaxy’s Greatest Comic’s stories succeeded and others bombed.

Often it really was like that scene in Metropolis, where the enslaved workers, heads down, trudge their way to the factory machines and operate them for endless hours. It was a factory and when I describe it to my colleagues in French comics, they shake their heads in disbelief. In France they have a benign system, which favours the comic creators and the publishers, and as a result they produce amazing and beautiful comic books, which are wildly successful.

(Japan is the world leader in comics. France is second. The United States is third.)

Why we had—and still have—a Lowry-like factory system in comics, albeit greatly improved—is something to do with British culture, the “them and us” attitude of management and workers, a hangover from the days of Britain’s harsh industrial past and, sadly,

it’s deeply ingrained in our national psyche. This is how it manifests itself:

As comic writers and artists, we do not own our characters: instead we sell all rights to the publisher. So any fees from films, reprints or merchandising go to the company and are not shared with the creators. In the beginning, none of it was ever passed on. Today, we receive a small percentage, although it’s below industry standard. Back then, and perhaps even now, they could also employ cheaper replacement writers and artists if we protested or became difficult, as I was frequently described. Worse, we had no credits on our work. This was a deliberate policy of the publishers to stop individuals from building up a fan following, and creators getting together, so any artist’s signatures on their work were ruthlessly whitened out. This policy worked for many decades, until Kevin O’Neill sneaked credits onto 2000AD stories and the industry was changed forever. Publishers’ lack of shame for these restrictive practices is something to be marvelled at.

Listen to Chapter 1 of Be Pure!

> Get the audiobook, narrated by Pat!

Books by the Author