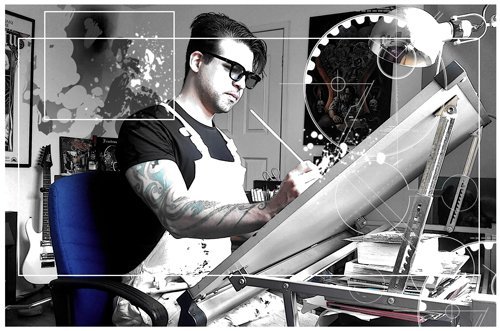 Bruno Stahl was born during the summer of 1982. A pretty remarkable summer for cinema, they say.

Displaying drawing skills from a young age, he developed a taste for the odd comic book early on, having a natural inclination for the fantastical and weird.

His first half completed comic book was a poorly drawn adaptation of Jurassic Park at the age of eleven, with this early project leaving a lasting impact on his small but faithful readership (mom and dad).

He has since contributed to many independent publications such as Futurequake and Inkshot; writing and illustrating the well-received series, “The Hans”; as well as occasionally working for Heavy Metal magazine and Image comics’ spread.

More recently, he was given the opportunity of redeeming himself from that precocious, paleontological train wreck by illustrating “Jurassic Punx” for Pat Mills’ upcoming anthology, Spacewarp.

Bruno is available for private commissions and other comics work – contact him at www.brunostahl.com

Jurassic Punx artist creator Bruno Stahl has an awesome signed limited edition print for sale on his e-store at brunostahl.com.